When I Encouraged Her, She Literally Began to Fly!

HomeUncategorizedWhen I Encouraged Her, She Literally Began to Fly! 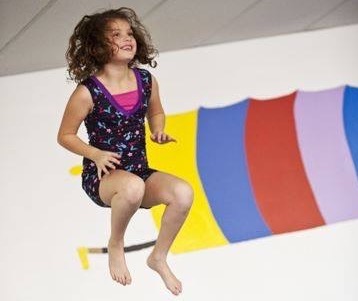 It wasn’t the bright white coat or cold, sterile environment that sent chills down my spine. It was the doctor’s life-changing words, “Your daughter has autism.”

With that overwhelming diagnosis, the doctor might as well have handed me a to-do list as long as Santa’s scroll. Even if I worked every minute of every day, I still could not fit in all the necessary therapy in for her condition. We immediately implemented thirty hours-a-week of behavioral therapy, occupational therapy, and speech therapy with diet changes and weekly doctors and nutritionist appointments. There were so many things to work on, so many skills she was missing…and so little time.

Day in and day out, we ran from therapy to therapy. I became mentally and physically exhausted and just wanted to feel a little bit normal again. It was this desire for normalcy that prompted me to put my daughter, Lizzie, into gymnastics. I had no idea what a great impact this would have on both our lives.

It was an adaptive version of gymnastics called “sensory gymnastics.”  I loved the idea of her doing an activity that was considered “normal”, and one beneficial to her body and brain all at the same time. Even though it made me so proud to tell others she was in gymnastics, actually watching her in class brought about different emotions.

Her lack of coordination, inflexibility and inability to do anything gymnast-like was heart-breaking. It was hard during each class to see girls her same age tumbling and balancing like they were on their way to the Olympics. The coaches were still working with Lizzie just to get her to stay with the class and to follow one-step directions. It was easy to be discouraged, but I made a conscious decision to stop comparing and find joy in each step of progress, no matter how tiny it was.

When she stayed with her group, I praised her. When she did her “gymnastics bunny hops,” I swooped her up in my arms and told her how proud I was of her. When, after a year of trying, she finally learned how to do a forward roll with the assistance of a wedge mat, we took video and bragged to all our family members. I quickly realized that the actual skills she was learning were not as important as building her confidence. As her love for the sport grew, she worked even harder.

After five years of gymnastics, we switched her to a bigger gym with more to offer. At first she “loved” gymnastics, then she began to live for gymnastics, often stating, “Gymnastics is my life!” 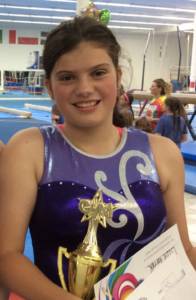 She begged to go more often, so we enrolled her in classes twice a week instead of one. Things were still moving slow, but she was picking up skills that I had seen other gymnasts do. She was beginning to straighten her legs on her cartwheels, she could do a handstand on the wall and a complete forward roll without assistance. We cheered her on each step of the way!

Lizzie began listing the skills she could do and told me over and over the goals she had for herself. She was determined to keep up with the other girls. Many days after gymnastics class, she came home and worked on our trampoline and mats for several additional hours. The other girls at the gym were motivated by her because she worked harder, longer, and refused to give up!

With autism, it is so easy to focus on what our kids can’t do. When I shifted the focus to what she coulddo, this gave her the confidence to continue to move forward.  Encouraging Lizzie in the small things brought out the joy in the journey and enabled her to experience the success she deserved.

For stories that will bring you big picture perspective in the midst of your everyday struggles, subscribe to the United in Autism blog HERE.